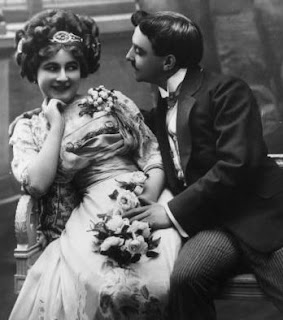 The London based weekly, Matrimonial News is a "public nuisance," declares Sir Richard Malius, Vice-Chancellor of the Chancery Court.  "It deserves to be put down if there were any means to do so."  The publication carries what we now would call "personal ads."

Sir Richard's outburst is prompted by the predicament facing a widow from Monmouth. Mrs. George, whose late husband, a wealthy solicitor, had left her with seven children, had placed the following notice in the aforesaid periodical:


A widow lady, aged 39, dark, ladylike, of good family, nice residence, and income of 700 pounds a year, would like to correspond with a gentleman from 50 to 60, with a view to marriage.

Not surprisingly, she soon received a response:


A widower of 50, medium height, considered good-tempered and a good man of business, exceedingly fond of children, and possessed of some property (real)..

After a brief correspondence, and against the wishes of her brothers, Mrs. George agreed to marry Arthur Clark. She also agreed, on her very wedding day, to a revised marriage settlement - handwritten in parts - transferring "first life estate" in her property to her new husband. Predictably, difficulties arose.  Arthur Clark was not exactly who he said he was.  He came to the marriage with nothing but four children. He was insolvent; his "property" was nothing more than some nebulous American claim. In the Chancery action, Mrs. Clark sued her lawyer and Sir Richard rules in her favor, returning her control of her estate.

What with its "happy ending," the case offered a good deal of amusement, however, The Spectator called it evidence of the "rank injustice" of the laws involving a woman's property: "The man, in fact, can only be robbed if he wishes it, while the woman must be robbed unless she appeals to law to protect her against robbery."

Matrimonial News persisted, exasperating Sir Richard.   He had cited a recent ad from a young lady, "tall and attractive" with £1200 a year.  "No one can believe that a young lady in such a position need advertise for a husband!"
Posted by Tom Hughes at 2:13 PM