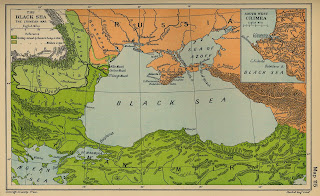 "It is with deep regret that Her Majesty announces the failure of her anxious and protracted endeavor to preserve for her people, and for Europe, the blessings of peace." After almost four decades of continental peace, the Crimean War begins as Britain, following by one day her French allies, declares war on Russia.

The Tsar, taking advantage of what he called the "sick man of Europe," the crumbling Ottoman Empire, had smashed the Turkish fleet at Sinope.  He had now set himself and the Russians in the role of protector of the Christians in the Holyland. Britain was long pro-Turk for the Turks guarded the Bosporus, keeping the Russian Navy out of the Mediterranean thereby securing Britain's water link with India.

Victoria, at first sceptical of the "mischievous blustering" of the Russophobic press, now concedes the move to strike the Tsar is "popular beyond belief." The war fever of The Illustrated London News is typical: "The most sincere prayer of every honest man in the civilised world will be formed for the speedy downfall of the Imperial Barbarian - an insult to the right feeling and common sense of mankind."  The war dragged on for two years and two days.

The war effort was hamstrung by inefficiency and graft. The radical MP John Bright coined the anagram. "Crimea is a crime." An unprecedented Parliamentary review of the Government's handling of the war toppled Prime Minister Aberdeen who was replaced by the wildly popular Lord Palmerston.

The allies having finally subdued the great Russian fortress at Sebastopol, the growing mood for peace led to the signing of the Treaty of Paris. As one historian has suggested, "There have been worse treaties after better wars." The Russians ceded back their pre-War gains and agreed to a neutral Black Sea. The British deaths exceeded 25,000, the Tsar is thought to have spent a half-million lives.
Posted by Tom Hughes at 5:12 AM