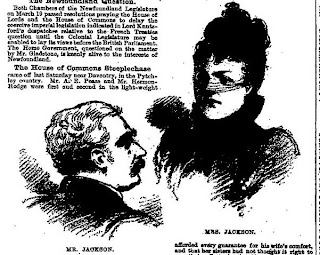 Emily Jackson leaves London a free woman, literally. Eleven days before, she had been abducted by her husband from the Lancashire village of Clitheroe. She was bundled off to a house in Blackpool where she was kept prisoner, watched by a six man detention squad. Blackpool police were turned away as Edmund Jackson produced a court order granting him restitution of his "conjugal rights." Crowds, mostly pro-Edmund, jeered at Emily when she appeared, often weeping, at a window.

Emily Jackson was 47, she had married Edmund in 1887. He was an idle sort of man, son of an Army officer and she had a small income. On their wedding night, he left for New Zealand - a trip she financed - to set himself up in business, whence he should send for her. They soon quarreled over-money via the post and she announced she would no longer have anything to do with him. Under then British law, a wife in such a predicament could not get a divorce. Edmund came home and obtained the aforementioned court order. As Emily would not see him, he kidnapped her.

Emily's sister's first appeal was turned down by a lower court which ruled: "Ill-treatment apart, a husband has the right to detain his wife in his house if he chooses." By now, the matter had attracted immense attention and was speedily appealed to no less than the Lord Chancellor. Under a writ of habeus corpus, Edmund escorts his wife to London. When his attorney cites an old law giving a husband certain powers over his wife, Lord Halsbury reminds him that the same statute allowed a husband to beat his wife with a stick no thicker than an inch. Jackson insists that his wife has "perfect liberty in his house ... short of leaving it." He denies ever shouting, "If you don't do as I tell you, I will screw your neck around like a chicken." Jackson says all the blame should fall upon Emily's relatives who are only after her money.

Emily is questioned in chambers by the three Law Lords who emerge to unanimously order her release. Lord Esher declares, "If this is law, then an English wife is the mere slave of her husband." Emily returned to Clitheroe where a mob, singing "For He's a Jolly Good Fellow," broke windows at her home.

While few men thought Jackson had acted properly, many worry that he is now trapped in a sham marriage, e.g. The Times: "Freedom is a very fine thing; but let it not be one-sided." The Saturday Review warned: "If marriage fell into general disfavor - it would be, all things considered, decidedly easier and pleasanter for men to provide themselves with substitutes for a wife than for women to provide themselves with substitutes for a husband."

The Penny Illustrated Paper
Posted by Tom Hughes at 6:57 AM