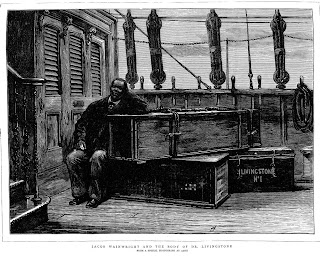 The body of the fabled Doctor Livingstone is laid to rest in Westminster Abbey. The epitaph now reads: "Brought by faithful hands over land and sea, here rests David Livingstone."

The story of the explorer's "last journey" is as fascinating as any of his African adventures. While on yet another trek to settle "the Nile question," Livingstone fell, ill with a mortal fever. Near Lake Bangweolo at the village of Chitambo, on 1 May 1873, he was found dead in his tent, kneeling by his cot as if in prayer. He was 59.

His two most trusted servants, Chuma and Susi, took charge of the body. Eviscerating the corpse, they replaced the internal organs with salt and then set the body in the sun for two weeks to dry. Bathed in brandy, the body was then rolled inside a cylinder of bark, which was wrapped with sailcloth and sealed with tar. The small party of Livingstone's "faithful followers" bore the body to the coast presenting it to the British consul at Bagamoyo. Chuma and Susi were brusquely dismissed, their expenses paid.

One native boy, Jacob Wainwright, a student at one of Livingstone's mission schools, was allowed to accompany the body to England aboard HMS Vulture. The primitive "embalming" process worked so well that doctors at the Royal Geographical Society were able to identify the body from the scars of a lion's bite thirty years before. Young Wainwright rides with the body in the procession to the Abbey: "His devotion to Livingstone appears to have been almost romantic," wrote The Times. Mourners note a wreath of azaleas from the Queen. The pallbearers include several veteran explorers, including the presumptuous Henry Stanley.

Prominently sited in the Abbey nave, Livingstone's memorial concludes with his last written words, a reference to his struggle to end the African slave trade: "All I can add in my solitude is may Heaven's rich blessing come down on everyone, American, English or Turk, who will help to heal this open sore of the world."
Posted by Tom Hughes at 4:26 AM