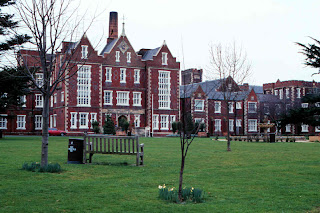 A patient's death at the Surrey Lunatic Asylum in Wandsworth prompts a national outcry over the treatment of such unfortunates.

65-year old Daniel Dolley, not a violent man but described as "excitable and foolish," had that morning struck Dr. Charles Snape, the resident Superintendant.  Dolley landed a "good sharp blow" to the doctor's head with his fist before being subdued by three "keepers." The angered Snape orders that the man be placed in a narrow shower-bath; "Pull the string, keep him in a half-an-hour." For 28 minutes, drenched by unheated waters, Dolley remains in the cubicle, less than two feet square, secured by an iron bar. Removed by an orderly, the poor man is dead within a quarter hour's time. At a perfunctory inquest at "the dead house," Dr. Snape pressures the autopsy surgeon to conclude that death was due to a bad heart.

The surgeon, however, surreptitiously removed Dolley's heart, which he then carried round to several London physicians, none of whom saw evidence of significant heart decay. The Commissioners in Lunacy soon charged Dr. Snape with "unlawfully causing the death of an aged lunatic." With an unblemished record, Snape admitted he had never treated a patient like that before, but he had never been struck by a patient before either. He's also supported by several experts who testify to the efficacy of the shower-bath in calming unruly madmen. Investigators for the Commissioners computed that Dolley had been drenched by some 618 gallons of cold water. One doctor even spent nine minutes in the cramped bath, he called the experiment "quite disagreeable," conceding that the experience had been probably even worse for "an exciteable lunatic."

Although the charge was reduced to manslaughter, a grand jury refused to indict. The Times, though acknowledging the "universally asserted" benefits of the shower-bath, called for restraints on its use, "It would be extremely difficult to convince twelve jurymen, not selected from the inmates of Bedlam, that any human being could endure the rush of water from a shower bath of unusual severity for half-an-hour without imminent hazard of life."

[The Surrey Lunatic Asylum from British Heritage]
Posted by Tom Hughes at 4:50 AM