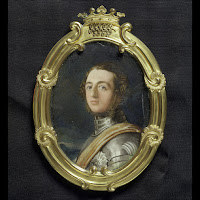 At Curraghmore, his estate in Ireland, the 3rd Marquis of Waterford is killed in a riding mishap. At the inquest, the laconic verdict was read: "Failing on his head, Lord Waterford dislocated his neck." At 49, he is much-mourned, hailed as "universally popular and respected," and hunt companions erect a marker at the site of the unfortunate accident.

Such encomiums at death would have been unexpected two decades earlier.  He was then known as "the Mad Marquis." Waterford is the stuff of legend.  In no particular order:
(1) He put a donkey in a stranger's bed at an inn.
(2) He petitioned, unsuccessfully, the local Irish railroad to stage a collision between locomotives for his pleasure; he would, of course, pay the bills.
(3) He started a riot at a Haymarket pub by standing free drinks for all the whores.
(4) He drove his carriage down the Piccadilly sidewalk, scattering pedestrians.
(5) For a time, he and friends made sport of stealing brass door-knockers in the West End.
(6) Assisted by some fellow Etonians, He raided the old school and made off with the flogging block upon which he no doubt had often felt the rod of the fearsome Dr. Keate.
(7) He often amused himself by tossing eggs from his carriage at passersby.
And finally (8), in Melton Mowbray, he and his playmates held down a local bobbie and painted him red. All fines were cheerfully paid, the last being the largest, £100 pounds.

Credit for reforming the Marquis went to his wife Louisa, daughter of Lord Stuart de Rothesay.  He met her at the madcap Eglinton Tournament (see 30 August) in 1839. In its obituary, The Illustrated London News comments: "Lord Waterford, under the influence of an admirable marriage, sedulously labored to efface all discreditable reminiscences, and to distinguish himself as a kind and wise Irish landlord whose loss will be deeply and deservedly deplored."

The Victorian hunting fields are a dangerous place; Waterford is the third peer in a year to die while hunting.
Posted by Tom Hughes at 5:17 AM