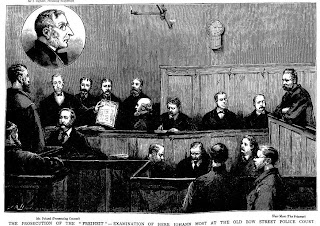 Johann Most, editor of Freiheit, an obscure journal published in London by the Communist Workers Improvement Association, is arrested on a charge of seditious libel.

Two weeks before, Tsar Alexander Il of Russia had been assassinated. Under the headline "AT LAST!," Most had written: "For an hour and a half, [the Tsar] underwent the most horrible suffering and was able to meditate on his guilty life. At last, he died as a dog dies ... Every success has the wonderful power of not only inspiring respect but of inciting to imitation. Hence, they are trembling from Constantinople to Washington for their long forfeit heads."

The Tsar's murder had caused alarm across Europe. In England, security surrounding the Queen was intensified. Travel plans for her regular spring visit to Osborne were secretly changed; she went by armed train and crossed the Solent aboard an Admiralty yacht.  Freiheit, the German word for freedom, was printed in German and its British circulation numbered only 300.  The weekly had been tolerated on English soil.  But when Most urged his readers to commit an assassination a month, police acted quickly.

A defense fund, including contributions from several radical MP's, obtained for Most the services of an eminent lawyer who argued that Shakespeare, Milton, Byron - yes, even Gladstone and Disraeli - had encouraged regicide, at one time or another. To no avail, Most is ordered jailed for eighteen months. The Lord Chief Justice accusing the editor of cowardice: "A man, himself under the shield of a great and free people, sitting at home at ease, may excite others to run into fearful dangers, which he himself shivers from attempting."  Freiheit remained in print until May 1882, when it was suppressed for articles hailing the perpetrators of the Phoenix Park murders (see 6 May).

Most was a German exile left badly deformed by a childhood accident.  He was no stranger to jail, having spent several years in an Austrian prison. Released from prison, Most left for America where he soon published a pamphlet on how to make and plant explosives.

Sketch from The Graphic
Posted by Tom Hughes at 5:24 AM