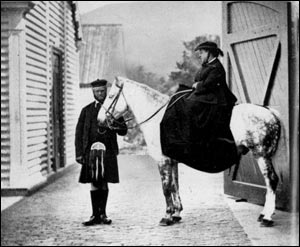 John Brown, the Queen's "particular ghillie," dies at Windsor Castle. But 57 years old, he died of erysipelas, a virulent fever, complicated, certainly, by years of heavy drinking. The Court Circular contains unusual praise for a servant:  [Brown was] "a trustworthy, discreet and straightforward man [who] filled a position of great and anxious responsibilities, the duties of which he performed with such constant and unceasing care as to secure for himself the real friendship of the Queen."
John Brown, of course, was no mere domestic. A crofter's son, born near the Queen's beloved Balmoral, Brown had been with her for 34 years. In 1865, she brought him to London: "Have decided that Brown should remain permanently & make himself useful in other ways besides leading my pony as he is so dependable." He was soon proclaimed "The Queen's Highland Servant" at a princely salary of £120. His relationship with the Queen was unique; she once greeted him in a letter as "My darling one," he was heard to address her roughly as "wumman."

It all gave rise to ribald comment in society and worse slanders from less responsible quarters. In 1866, a Swiss newspaper reported a child had been born to "the Empress Brown" and placed with a Protestant family in Vaud. Despite a protest from the Foreign Office, the story soon won a "wide vogue." While the claim of a bastard bairn can easily be discredited, Brown remains a riddle. He's been labeled a bodyguard, jester, drinking-buddy, even - through the famous second-sight of the Highlanders - the Queen's medium to reach her long lost Albert.

Brown's death leaves the Queen bereft. To a grandson, she wrote: "I have lost my dearest best friend whom no one in this World can ever replace." To a friend: "Weep with me for we have all lost the best, the truest heart that ever beat. My grief is unbounded." Victoria soon produced for publication a John Brown memoir. She was firmly dissuaded by her aghast family and staff. It was burned.

When King Edward VII took the throne, he ordered most Brown memorabilia destroyed. A life-sized statue by Boehm, that the Queen had given pride of place at Balmoral, was re-situated along a rarely traveled wooded path. Tennyson had composed the inscription:


Friend more than Servant, Loyal, Truthful, Brave
Self less than Duty, even to the Grave.

[Photograph from the Daily Telegraph]
Posted by Tom Hughes at 5:08 AM