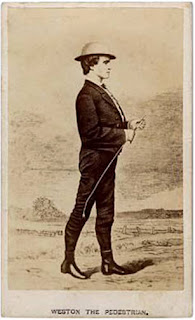 18,000 people jam the Agricultural Hall in North London for the sixth and final day of "The Great International Pedestrian Tournament." The surprising winner is the unheralded William Corkey of Bethnal Green. The marathon walking events, known as "wobbles" owing to the peculiar gait of the contestants, are the rage of sporting (read: Gambling) London. Promoter Sir John Astley put up a £1000 purse and a bejewelled belt to attract 18 of the foremost competitors, including the fabled American Edward Weston, easily the pre-race favorite.

The Yank (right), known to his countrymen for walking from Maine to Chicago, took to the boards with his customary arrogance, engaging in his "usual buffoonery." On Day 3, however, a twisted ankle hobbled the great man. Though he returned to the course valiantly, demonstrating "that remarkable freshness for which he is characterised," Weston soon faded. The race came down to a two man battle between Corkey and "Blower" Brown, the latter's nickname coming from his distinctive and quite audible breathing patterns. Brown held a two-mile lead on Day 3 but Corkey - staying on the track for five hours straight – seized the lead by midnight of Day 4 and held it the rest of the way.

In addition to the ample prize money, Astley upgraded the sport by pampering the "pedestrians" with commodious tents for their periodic rest periods and providing hot food and medical care as well. The expense is returned by increasing public interest. A raucous crowd awaits the finish; The Times correspondent reports they "seemed to be well-acquainted with the principle contestants, judging from the manner which they cheered their respective favorites."

In the end, Corkey took the £500 first prize with a total of 521 miles (87 miles a day on average!). Brown is "walker-up" with 506 miles. Weston disappoints his partisans with a lackluster total of 365 miles.

He was recovered by January to begin a bid to walk 2000 miles in 1000 hours. Stepping off from London in driving snow, he made it 75 miles to Folkestone the first day. Alas, hampered by another injury - he was knocked down by overenthusiastic fans in Wimborne Minster - Weston fell 22 miles short of his goal.
Posted by Tom Hughes at 4:23 PM