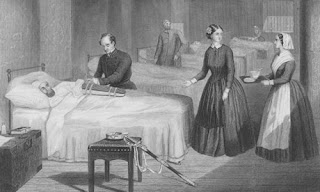 The War Office - in the face of almost daily newspaper accounts of the ghastly medical conditions facing the British Army fighting in the Crimea - announces that Florence Nightingale will be dispatched along with 38 hand-picked nurses.

The 34-year old Miss Nightingale, who runs a fashionable nursing home in London's Harley Street, had written the Secretary of War, Sidney Herbert, pleading to be sent out, "I do believe that we may be of use to the wounded wretches." The Government had opposed sending women to the war zone, fearful more, perhaps, for their virtue, than their stomach for such gore. However, news reports of the Sisters of Mercy who were tending the wounded allied French soldiers, forced a change of policy, announced by Lord Herbert: “Miss Nightingale, who has, I believe, greater practical experience of administration and treatment than any other lady in this country, has, with a self-devotion for which I have no words to express my gratitude, undertaken this noble and arduous work.” Numerous prominent ladies were quick to volunteer, however, with Miss Nightingale's concurrence, those without medical training were rejected as "of no use whatsoever."

With her nurses in tow, Miss Nightingale arrived at Scutari in November, coming face to face with indescribable conditions. She had been directed to report to the Chief Army Medical Officer at the hospital in Scutari, "under whose orders and direction you will carry on the duties of your appointment." Of course, her clashes with her military superiors are now legendary. A repeated foe was Dr. John Hall, the Inspector-General. After the war, he was made Knight Commander of the Bath. Miss Nightingale thought the K.C.B. should stand for "Knight of the Crimean Burial Grounds."

"The Lady with the Lamp" is given credit for almost halving the death rate among the wounded. Modern historians are more skeptical; Byron Farwell suggests Miss Nightingale's activities proved "counter-productive," serving more to harden the Army Medical Corps against change. Regardless, after the war, Florence Nightingale was honored by the Queen who presented her with a golden brooch which read "Blessed are the Merciful."
Posted by Tom Hughes at 7:59 AM