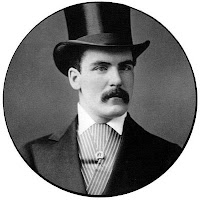 "The Lambeth Poisoner", Dr. Thomas Neill Cream is found guilty at the Old Bailey for the murder of Matilda Clover, one of his (at least) four prostitute victims. Glasgow-born, Cream had emigrated to Canada where he took his degree and embarked upon "a career of malpractice and murder."  When one of his patients died during an abortion, he fled to the U.S. In Chicago, he served time for helping to poison a woman's husband with strychnine for the insurance.

Upon his release, he sailed for London, where, in October, 1891, he opened a clinic in Lambeth for "girls of the town." Within two weeks of his arrival, two women were found dead of strychnine poisoning. Cream added blackmail to his sins by writing to prominent gynecologists, signing himself "M. Malone," and accusing the physician of poisoning the young women: "It is just this - £2500 sterling on one hand, and ruin, shame and disgrace on the other. I am not humbugging you." One doctor, William Broadbent forwarded the letter to Scotland Yard.

In early 1892, two more unfortunate women were found dead in a shabby room above a pub at Elephant & Castle; the inquest verdict -- they had been poisoned with nux vomica, a.k.a. strychnine. Three weeks later, aided by a young woman's description of a man who gave her some pills, which she wisely tossed into the Thames, police arrested Dr. Cream.

The London jury takes but a quarter-hour to convict and Judge Henry "Hanging" Hawkins condemned Cream to the gallows for his "unparalleled atrocity." The Times put Cream amongst that "certain number of moral monsters whom it is the first duty of society to hunt down and to destroy."

At his hanging, as the bolt was thrown, Cream reportedly shrieked, "I am Jack the …”  It is pretty certain, however, that Cream was in an Illinois prison at the time of the Whitechapel murders, but some "Ripperologists" think they've got their man.  They point to some handwriting samples that seem to match. For devotees of the bizarre, the eminent Sir Edward Marshal Hall, who defended Cream on an earlier bigamy charge, said the man claimed that he had an underworld double, whom he often used as an alibi. Not to ruin a very good theory, but Illinois officials do insist that Dr. Cream (Inmate 4274) remained their guest at the prison in Joliet until mid-1891.
Posted by Tom Hughes at 8:13 AM