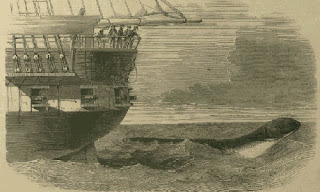 The Illustrated London News publishes the first sketch (left) of the great "Sea-Serpent" which had been spotted by the crew of HMS Daedalus in the South Atlantic.

The drawings are based upon the descriptions provided to the Admiralty by the ship's commander, Capt. Peter M'Quhae R.N.  Some 300 miles off the African coast, the gallant officer had observed a beast of "extraordinary dimensions.... its head appeared to be four feet out of the water, and there was about sixty feet of its body in a straight line on the surface."  Capt. M'Quhae hails the artist for “most faithfully" recapturing what it was he saw from the quarterdeck.

The sketches prompt an immediate sensation and a vigorous debate. The letters columns in both the popular and scientific journals are soon filled with corroborative testimonials. Soon, however, the great paleontologist Richard Owen, who had coined the word "dinosaur," wrote to The Times to assert that the creature was nothing more than a large sea lion, stranded by the melting of an Antarctic ice-flow. While he graciously conceded that such a beast could be "readily mistakable" for a sea-serpent, he concluded airily, "A larger body of evidence from eye witnesses might be got together in proof of ghosts than of the Sea-Serpent."

The good Capt. M'Quhae, his honor and eyesight impugned, joined the epistolary fray; he insisted the beast had been "coolly and dispassionately contemplated" by several veteran seaman who know a seal when they see one.

Punch has the last word with an item headed MISSING: THE GREAT SEA-SERPENT. Anyone espying same is urged to contact their office for the monster "had been going lately to great lengths [and] friends fear that he may have come to an untimely end."

The Daedalus sighting spawned numerous copycat claims of serpents and "sea snakes."  In 1861, the Victorian naturalist Philip Henry Gosse concluded that "immense unrecognized creatures of elongate form roam the ocean."
Posted by Tom Hughes at 4:53 AM