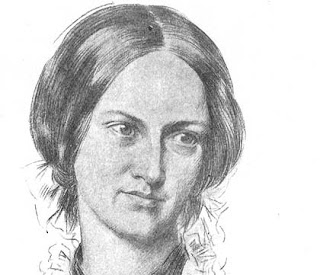 Jane Eyre by the hitherto unknown author "Currer Bell" goes on sale in London. It is quite literally an instant success. Of course, the author is Charlotte Bronte, eldest of three sisters writing daily in their father's Yorkshire vicarage. A collection of poems (by "Currer, Ellis and Acton Bell") published at their own expense had sold but two copies. Charlotte's manuscript for a novel titled "The Professor" had passed through several disapproving hands before W.S. Williams, a reader at Smith Elder gently rejected it. Encouraged, she sent him another novel - postage due! - and an enthusiastic Williams passed it on to George Smith who read it and ordered its immediate publication.

The reviews are overwhelmingly positive: The Examiner calls it "a book of decided power," The Atlas finds it "not merely a work of great promise ... a work of absolute performance." Thackeray - at the height of his Vanity Fair fame - praised it. "It interested me so much that I have lost (or won if you like) a whole day in reading it." Queen Victoria read it and - alas not for publication - called it "intensely interesting." On the other hand, The Spectator found the relationship between Jane and Mr. Rochester "hardly proper" and, in general, decried the book's low moral tone. The most damning review came in the conservative Quarterly Review which deplored a "pervading tone of Godly discontent." The reader found Jane to be "the personification of an unregenerate and undisciplined spirit" and, in a gratuitous aside, the critic concluded that if (as speculated) the author is a woman, she must have "forfeited the society of her sex."

Charlotte dedicated the second edition to Thackeray, hailing him as "the first social regenerator of the day." It was ill-advised as Thackeray was similarly situated as Mr. Rochester - that is, trapped in a marriage to a madwoman. Malicious gossip swirled that "Currer Bell" was Thackeray's governess or, worse, his mistress. Informed of the unintentional scandal she'd caused, Charlotte stated: "Fact is often stranger than fiction! Of course, I knew nothing whatever of Mr. Thackeray's domestic concerns... but I am very very sorry that my inadvertent blunder should have made his name and affairs a subject for common gossip."
Posted by Tom Hughes at 7:52 AM