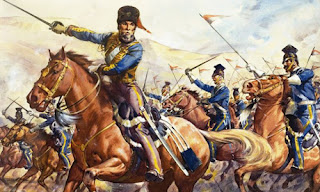 On the Crimea, at Balaclava, Russian troops have overrun hillside positions formerly held by Britain's Turkish allies.  The Russians are preparing to haul off the captured guns. The British commander Lord Raglan issues a written order: "The cavalry [is] to advance rapidly to the front, and try to prevent the enemy carrying away the guns."

The Light Brigade, previously inactive this day, is led by the vainglorious Lt. Gen. James Thomas Brudenell, 7th Earl of Cardigan. Raglan's order is carried by a Capt. Nolan to Lord Lucan, both Cardigan's superior and his detested brother-in-law. Nolan happens to detest them both. From their position, Lucan and Cardigan cannot see the hillside guns but only the main Russian artillery, at the end of a long, narrow valley. Nolan, vaguely waving his sword, shouts at a disbelieving Lucan, "There are your guns, sir!" Cardigan tells Lucan that the charge is madness and he shall not bring a man back alive, but Lucan responds, "I cannot help that." Cardigan gives the quiet order, "The Brigade will advance."

As Raglan looks on in horror, the Light Brigade charges directly into the muzzles of the well-placed Russian artillery.  Capt. Nolan is among the first to die. Incredibly, men and horses get through, and rout the Russian gun crews in savage hand-to-hand combat. 673 men attacked, fewer than 200 survive. Lord Cardigan, shaken but unhurt, retreats to his yacht off shore for a champagne supper, telling friends, it was "a mad brained trick [but] no fault of mine." A French officer, who witnessed the attack, says, "C'est magnifique. Mais, c’est ne pas le guerre."

By December, Tennyson, the Poet Laureate had penned his unforgettable Charge of the Light Brigade. The second stanza reads:

'Forward, the Light Brigade!'
Was there a man dismay'd ?
Not tho' the soldier knew
Some one had blunder'd:
Theirs not to make reply,
Theirs not to reason why,
Theirs but to do & die,
Into the valley of Death
Rode the six hundred.