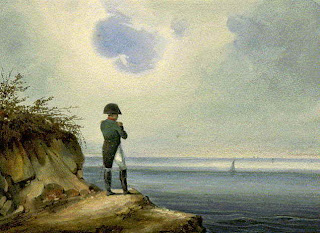 With representatives of the British and French governments looking on, the body of the great Napoleon is exhumed from his tomb on the remote South Atlantic island of St. Helena. Foreign Secretary Palmerston had acceded to French requests for surrender of the body, hoping "those full grown children [might] think less of other things."

The somber process begins at one in the morning in "Napoleon's Valley," where the Emperor was laid to rest in 1821. It takes eight hours to reach the vault, 11 feet below the earth. The 4-by-8-foot sarcophagus is raised and sprinkled with lime and holy water. The lead coffin is opened, inside is one of wood, and inside that, a tin box. A Catholic priest intones the appropriate liturgy as the last lid is raised.

The official report states: "His features were so little changed that his face was recognized by those who had known him when alive." Dr. Guillard, a French naval surgeon, examines the body literally from head to toes, "the skin of the toes was a dull white and the nails were still adherent." Bonaparte's body is replaced and resealed and borne by cortege with full military honors to the waiting frigate, La Belle Poule.

More than a million people packed Paris when the Emperor's body arrived in December. The Times described it as a "fine spectacle," but added disapprovingly: "While the rest of Europe has been taught by sad experience to reprobate the name of Bonaparte as the greatest disturber and destroyer of mankind known to modern history, France regards him as her patron and her idol. Why is this?"

In 1855, during the first visit to Paris by a British monarch since Henry VI in 1431, Queen Victoria paid her respects at the tomb of the bitter enemy of her grand-father's time. Several aged French generals were seen to be weeping. The Annual Register recorded: "It can scarcely be supposed that Her Majesty was equal to the associations the scene was calculated to produce ... The incident was moralized upon long after by the thoughtful of both countries."