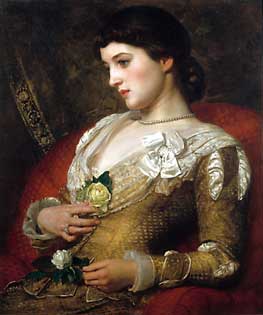 Adolphus Rosenberg, the editor-publisher of gossip sheet called Town Talk, is arrested for libel. For months, he had been printing articles alleging trouble between Edward Langtry and his wife, "the Jersey Lily." Rosenberg labeled Mr. Langtry a "dummy husband" and suggested divorce was imminent. Finally, Rosenberg printed the provocative disclosure: "A petition has been filed in the Divorce Court by Mr. Langtry. His Royal Highness the Prince of Wales and Lord Lonsdale and Lord Londesborough are the co-respondents."

While the Prince's two-year relationship with Mrs. Langtry was no secret to the haut ton, such an allegation in a "gutter" publication could not go unchallenged. Mr. Langtry, ever the compliant husband, takes the stand to deny Rosenberg's charges, "There is not a single word of truth in them ... I am now living at home with my wife."

Unable to make his bail, Rosenberg remained in jail, his paper went unpublished. Rosenberg's trial, was eagerly awaited; would he attempt to prove the truth of the allegations? Would the Prince be called? Strangely, neither occured. Rosenberg, instead, began his trial by apologising, claiming he had been misled by a source whom he would not identify. His attorney suggested that the parties maligned would have been well-advised to have ignored the whole thing. He added, not without irony, to be sure, they might instead "rely upon their own consciousness of perfect purity, and upon the domestic happiness which they continue to enjoy." Calling the apology "absolutely worthless," Langtry's counsel demanded harsh punishment: "He has imputed adultery to a lady of position and implicated some of the highest persons in the land." Found guilty, Rosenberg received an 18-month sentence - without hard labor - and a lecture from Mr. Justice Hawkins who accused him of "pandering to filthy appetites."

Of course, the stories were, by and large, true. Inevitably, the Langtrys soon went separate ways; he went off to his doom beset by the bottle and bankruptcy and died in an asylum, she went on the stage.

Lily Langtry by Poynter
Posted by Tom Hughes at 7:21 AM