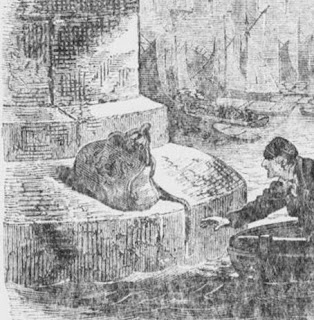 After a month of wild speculation, a baffled London coroner's jury writes off the "Thames Carpet Bag Mystery" to "person or persons unknown."

On the night of 9 October, the toll-taker at Waterloo Bridge helped a woman through his gate carrying a large carpet bag. He remembered her as short, sallow and with a gruff, masculine voice. The next morning, some boys boating on the Thames found the bag on a bridge abutment. It had been lowered with a rope to avoid a splash, but the current had washed it on to the footings of the bridge.

Inside the bag were 23 bones, minus the skull, and a full suit of blood-soaked clothing bearing the holes left by a series of savage knife wounds. For days, the Press provided explicit details. The sex, for example, was determined by "a portion of the anatomical structure of the male - rudely mutilated - still adhering to the arch of the pubis." The man had been dead for three to four weeks, his flesh roughly cut away from the bones which were then preserved in brine.

Medical experiments are the first focus of speculation. The head of the Royal Medical Society denounced such suspicions as "simply absurd," claiming the body had been crudely butchered by someone "entirely ignorant" of anatomical studies. Others suspect the victim may have been the "unfaithful accomplice" of some foreign agents. Adding credence to that surmise is the fact that the clothes are of French or Belgian manufacture.

It was hoped that the socks, "of peculiar make and material," might provide a vital clue. The victim’s clothes were hung on a line strung up at the Bow St. Police Station.  Lines of people – many claiming to be anxious relatives of various missing persons – passed in parade.  Most were merely "morbidly curious." Adding to the ghoulish atmosphere, several people brought in skulls hoping to match the head with the body. This troubled The Illustrated London News: “Such facts set men thinking upon the amount of unknown crime that exists in our enormous and overgrown metropolis - our province of houses.”

Not even a reward of £300 could solve what was to remain London's greatest mystery until the Ripper struck in Whitechapel.

Sketch courtesy of the JTR Forums.
Posted by Tom Hughes at 4:28 AM