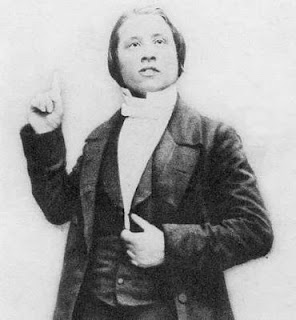 Eight people are crushed to death at the Surrey Gardens Music Hall when panic sweeps a crowd gathered to hear "the Cambridgeshire lad," the Rev. Charles Spurgeon.  Just 25, Spurgeon has established himself as the "most wonderful preacher" in England.

It is a Sunday evening fund-raiser to help the young Baptist build his dream tabernacle. The crowd is estimated at 14,000 in a hall designed for 10,000 with thousands more outside. The preaching has not even begun when people start surging toward the exits in terror. Some say they heard a cry of "Fire!"  The jammed balconies began to sway. The stairways and limited exits are soon an horrific mass of tangled, desperate people.

To calm his flock, Spurgeon appears on stage. A call for "Praise God From Whom All Blessings Flow" goes unanswered as the choir has fled the gallery. The cleric's choice of sermons, Proverbs 3:33, "The Lord's curse is on the house of the wicked," is hardly reassuring. He shouts above the din, "There is a terrible day coming when the terror and alarm of this evening shall be as nothing." He soon faints and must be carried to safety by his deacons.

Spurgeon remained too unwell to attend the subsequent inquest. His assistants blamed un-named "wicked designing men" who had a wish to disrupt Spurgeon's message. The press attacks are immediate.  Many noted the fact that Spurgeon's flock behaved no better in a crush than a music hall mob. Men were seen to knock down women and children to get to safety. The Spectator said Spurgeon proved "quite unable to control his multitudes," The Illustrated London News claimed that Spurgeon had "degraded the pulpit to a far lower level than that of the broadest buffoonery of the stage," The Times reminded him, "There are limits to all things, even hearers," and The Saturday Review actually accused Spurgeon's minions of continuing to "hand round the begging box" despite the tragedy.

His ministry recovered; in 1861, Spurgeon opened his Metropolitan Tabernacle south of the Thames which held but 6000 souls. He often referred to the Surrey Gardens disaster, claiming he had been hardened in "a burning furnace."

The Rev. Mr. Spurgeon at theologue.org
Posted by Tom Hughes at 4:46 AM