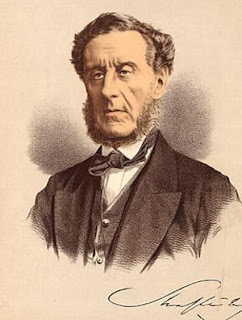 A butcher-boy, wrapping meat with some scrap paper purchased from a rag-shop, discovers an unopened envelope addressed to the noted Lord Ashley. Inside, he finds a £100 note, a clergyman's donation to Ashley's Scottish Pastoral Aid Society.

The curious youth turns the find over to his employer, Mrs. Anstee. Her solicitor advises that Lord Ashley must be informed. The great man's instructions are clear: the money must "be returned to me, forthwith." The irony here is that Ashley (later and better known to history as the benevolent 7th Earl of Shaftesbury), an outspoken leader in reforming the workplace and public health, displays some typical aristocratic hauteur when confronted with an actual living member of "the lower orders."

So, off goes the butcher's wife to Grosvenor Square and from here our story varies. In newspaper accounts, with headlines such as HONESTY REWARDED?, Ashley is accused of making "insinuations tending to implicate the poor woman." Threatening prosecution, he dismissed her with neither thanks nor reward. Stung by the rare attacks on his character, Ashley responded with a letter to The Times. Admitting he discarded the letter believing it to be a circular, he still cannot understand why, since the envelope was clearly addressed to him, it was opened by a mere "shopboy." Denying insinuations of any kind, the nettled nobleman declared that the matter had been settled "very amicably."

While the incident caused no lasting damage to Ashley's reputation, for the moment at least he was an uncustomary target of the hostile Press. The Times pitched into him for his "utterly thoughtless, heartless, ungracious and silly" behavior. Given the way Lord Ashley handled his correspondence, the leader writer declared that he would "rather send 100 pounds through Mrs. Anstee's shopboy than through the noble member for Dorsetshire."
Posted by Tom Hughes at 7:57 AM