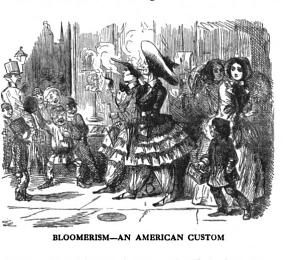 A much publicized "Bloomer Ball," is held at the Hanover Square Rooms in Mayfair.

"Bloomerism," of course, is named for the American feminist Amelia Jenks Bloomer who - seeking to end the "tyranny of the corset" - endorsed a loose-fitting costume.  The Bloomer ensemble was described thusly in one contemporary account: “A velvet coatee ... buttoning tight around the waist, but open, showing a frilled shirt front at the bosom, the sleeves fitting the arms closely and the skirts descending to the knee; the 'bloomers' are exceedingly full to the knee, but tight from there to the ankle, where they are drawn close.”

For several weeks in advance of the ball, a small group of American women, in full "Bloomer" attire, had been attracting much curiosity. They strolled Piccadilly and held thinly attended, but well-reported, lectures to promote the advantages of such "easy flowing drapery" for both comfort and health: "How can you expect the heart or lungs to perform their function when you allot to them half the space provided by their Creator?"

The "ball" is touted as an opportunity to demonstrate how much easier it is for ladies to dance "unencumbered." Unfortunately, the strangely-clad women are far outnumbered by curious young men.  Punch found the Bloomerists an easy and frequent target for ridicule. Here, in the style of Tennyson's "Locksley Hall":


And at night along the pavement, near the corner of the Square,
At each new alighting Bloomer, stood a noisy crowd to stare;
But the crowd was disappointed, seeing what it witnessed then;
Scarcely half-a-dozen Bloomers, nearly seven hundred men.

Every Guardsman in town on leave, it seems, turned out for the Bloomer Ball.  Soon, the young men are quite bored and drunk. A food fight of sorts erupts in the refreshment area and there are numerous other scuffles among the more ardent guests. The Illustrated London News labels the event "a decided failure," adding haughtily that the ladies in "bloomer" costume are "not exactly of the class of persons who should be taken as models, either in their dress or conduct." The Times sniffs, "A Bloomer Ball may be a very good thing, but we would rather see less men and more ladies, and have them better behaved."

A sketch from Punch
Posted by Tom Hughes at 5:00 AM