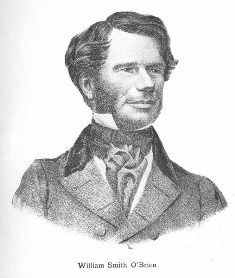 William Smith O'Brien M.P., whose short-lived Irish rebellion ended ignominiously in the Widow McCormack's cabbage patch, is sentenced to the traditional fate of the traitor: "You [will] be drawn on a hurdle to the place of execution and be there hanged by the neck until you be dead; that afterwards your head shall be severed from your body, and your body divided into four quarters, to be disposed of as Her Majesty shall please; and may God have mercy on your soul."

Although still reeling from the murderous famine, Ireland was not immune to the revolutionary "Spirit of '48" which toppled the French King and produced the Chartist rising in England. Newly mobilized "volunteers," unarmed and hungry, listened eagerly to incendiary speeches. In mid-July, the British began rounding up the leaders.  Harrow-educated and a Protestant, O'Brien was one of the last to keep his freedom.

His "army" soon dwindled to a few dozen, including the ubiquitous informers and provocateurs. At Ballingarry, Tipperary, O'Brien's forces surprised a police detachment, which took shelter in Widow McCormack's farmhouse. When the rebels tried to set the house ablaze, the besieged police opened fire; several men were killed, the remainder fled. O'Brien was reportedly taken crawling on all fours across a field. The Times, nothing if not consistent in its opposition to Irish independence, exulted: "What chance have they of a successful rebellion out of such miserable materials...O'Brien crawling among the cabbages is an emblem of the national degeneracy."

Convicted of treason, O'Brien tells the court, "I have done only that which, in my opinion, it was the duty of every Irishman to have done." At the announcement of the medieval fate awaiting O'Brien, the crowd outside the Dublin court is described as "wild with grief." There are many calls to spare O'Brien; The Illustrated London News predicted, "Living he will be harmless; but dying the traitor's death, he will become dangerous."

The sentence commuted, O'Brien was transported to Tasmania where, unlike many of his countrymen, he kept his word not to try to escape. Pardoned in 1856, he returned to Ireland but avoided political involvement.
Posted by Tom Hughes at 5:20 AM