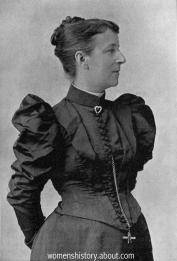 It's Saturday night at the infamous Empire Theatre of Varieties, Leicester Square's most popular music hall. Along the Empire's promenade would stroll some of London's finer ladies of the evening, all hoping to catch the eye of one of the raffish (and generally well-off) gents who lined the men's bar.

Tonight, however, there's something new at the Empire, a flimsy canvas screen has been placed to separates the sexes. The theatre had been under attack from the so-called "prudes on the prowl," headed by the euphoniously named Mrs. Ormiston Chant. She had gone before the London County Council to denounce the Empire as "an habitual resort of prostitutes." She spoke of going "undercover", if you will, to visit the Empire whilst wearing her "prettiest evening dress." She had been accosted almost immediately, finding the crowd entirely of an "immoral character."

Mrs. Chant and her ilk were denounced in the racier papers as "moody fanatics" with "greasy minds." Still, the women forced the L.C.C. to act and the screen was grudgingly installed. It fails its first test. A group of military cadets from Sandhurst, led by, of all people, 19-year old Winston Churchill, tears down the offending partition. Amid the melee, Churchill proclaims "Ladies of the Empire, I stand for Liberty!"

In his droll autobiography, My Early Life, Winston recalled: “In these somewhat unvirginal surroundings, I made my maiden speech. Mounting on the debris ... I addressed the tumultuous crowd, 'You have seen us tear down the barricades tonight; see that you pull down those who are responsible for them at the coming [municipal] election.'” Never publicity shy, Churchill added, "This episode made a considerable stir, and even secured leading articles in most of the newspapers." And some unfavorable comment; the Bishop of London wrote The Times to say he never expected to see a descendant of the great Duke of Marlborough greeted by a "flourish of strumpets."

The Empire rioters failed to achieve their goal. The Empire and other such music halls were to be cleaned up, if slowly.