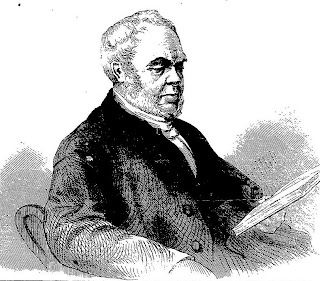 The Rev. John Selby Watson - a respected scholar and former longtime headmaster at the Stockwell School in South London - murders his wife, bashing her head in with the butt of a pistol. He then stuffs the body into a small closet off his library; he tells a curious servant that the blood red stains on the carpet were caused by spilled port.

The 67-year old cleric spent the next two days getting his affairs in order, leaving strict instructions for the disposal of his books and papers, including a translation of Valerius Flaccus "which I think deserves to be published." On the third day, he took to his bed with prussic acid, leaving a note: "In a fit of fury I have killed my wife. Often and often she has provoked me and I have had to restrain myself, but my rage overcame me and I struck her down." Well trained in the classics but no so much in chemistry, Selby-Watson underestimated the dosage, and survived the suicide try to be charged with murder.

The brutal, calculated slaying, according to a contemporary account, cast "a distressing gloom over all thoughtful minds." He pled insanity, claiming a melancholia brought on by the loss of his job after 25 years and a difficult married life. Even friends of Anne Selby-Watson described her as "always fretful."

When an unsympathetic jury of Londoners sentenced Selby-Watson to die, the Home Secretary was besieged with appeals for mercy, many citing the murderer's age and scholarly accomplishments. The Press objected: The Times groused, "There are other murderers besides clergymen ... if extremity of temptation be once admitted as a bar to execution, a dangerous hope might be opened to criminals," and The Spectator decried "sickly sympathy... not creditable to English moral feeling," and wondered who was to plead the dead woman's case. In plainer language, The Globe inquired, "Would the same sympathy have been felt if a Mr. Mick Connor had knocked his wife's brains out with a pick-axe?" Nonetheless, the sentence was soon commuted to life.

Rev. Selby-Watson died in his hammock in prison on the Isle of Wight in 1884. He makes The Dictionary of National Biography with the unique listing of "author and murderer."

Penny Illustrated Paper
Posted by Tom Hughes at 5:18 AM