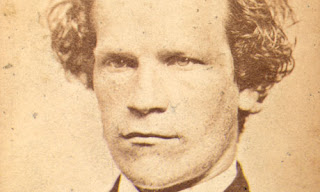 Franz Muller, a 25-year old from Cologne, working as a tailor in London, is placed on trial at the Old Bailey for Britain's first railway murder.

In July, Thomas Briggs, a 70-year old chief clerk at a Lombard Street bank, was found along the tracks of the North London line between Hackney Wick and Bow. He had been beaten and robbed.  His skull fractured, Briggs died within hours. The murder weapon had been the dead man's own heavy walking stick and a blood-spattered 1st class railcar (Carriage No. 69) testified to the brutal struggle. The Times called it "one of the most atrocious crimes to ever disgrace this country." The Spectator called the interest in the murder "excessive."

The killer had left a helpful clue for police; a felt, beaver hat, popular with Germans. Within days, a Cheapside pawnbroker named Mr. Death (!) reported a man with a German accent had hocked a watch-chain. The chain was identified as belonging to Mr. Briggs. Rewards posted by the Bank and the railroad coaxed out more clues, including information on the vital hat, which led police to Muller.

By then, however, Muller had sailed for America. Scotland Yard detectives went by a faster steamer and had been waiting a week when the suspect sailed into New York Harbor. Reporters almost foiled the trap, hiring an excursion boat which met the incoming ship; newsmen cried out, "Which one's Muller the murderer?" Arrested in his cabin, with Briggs' watch in his possession, Muller was returned to England amidst widespread public excitement. He was jeered and hooted from Liverpool to London.

Muller told police that he bought the watch on the docks in London and had been with a Camberwell prostitute the night of the murder. Prosecutors presented evidence claiming that Muller had been seen that night at Fenchurch St. Station where - they theorize - he saw Briggs consult his gold watch and conceived his lethal scheme.

Muller was ably defended, the legal bills paid by the German Legal Protection Society.  Nevertheless, he is quickly convicted and sentenced to die. He left the dock in tears. Despite a plea for clemency from many German interests, Muller – having first made a full confession - was hanged at Newgate in mid-November.
Posted by Tom Hughes at 4:40 AM