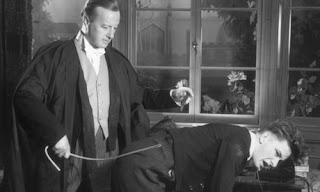 The Queen records in her journal one of her more unusual conversations with her first Prime Minister, Lord Melbourne. Not yet twenty years old, Victoria is fascinated by the urbane Melbourne and her journal is filled with her accounts of their talks on subjects ranging from society to religion to literature. Today, they discuss flogging.

The P.M. tells Her Majesty that while at Eton, a school famous for the unspared rod, he was often flogged with '"amazing effect." The feared headmaster, Dr. Keate was said to birch ten lads a day, except on the Sabbath. As for Melbourne, he says of his private tutor, "I don't think he flogged me enough, it would have been better if he had flogged me more." When the Queen offers that flogging is degrading and must be disliked by the young lads, Melbourne confides mysteriously, "They don't like the pain of it."

The insinuation takes on added interest with revelations by his most recent biographer, Philip Ziegler, that Melbourne had a "curious, obsession with beating and 'discipline', particularly involving girls or women." His own marriage a disastrous failure (his wife ran off with Byron and went mad; his only son, a half-wit, died young), Melbourne took a succession of mistresses with whom flagellation was a frequent theme. To one of them, Lady Brander, he wrote: "A few twigs of a birch applied to the naked skin of a young lady produces with very little effort a very considerable sensation."

Melbourne was hardly alone in his interest in what was known as "the English vice." A whole sub-genre of pornographic literature flourished to cater to those with an interest in "the rod," stories supposedly authored by "Lady Termagent Flaybum" or "Lady Harriet Tickletail." The most famous customer of the "birching parlors" of London was the poet Swinburne. He described one such establishment where "two very young
girls... pretend to be schoolmasters and whip fearfully severely, belaboring their clients across their knees like children." In his diaries, Mr. Gladstone recorded that he scourged himself frequently for his sins. He found "the pleasure and the pain simultaneous and the first superior."

Photograph from The Guardian (Getty Images)
Posted by Tom Hughes at 7:38 AM