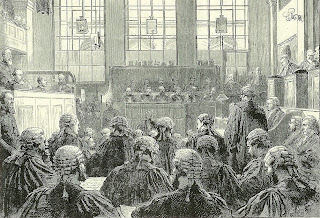 The Old Bailey courtroom is crowded with the fashionable. Expecting titillation, they are not disappointed. 19-year-old Alice Lowe is charged with stealing several items from the home of Lord Frankfort, 2nd Viscount de Montmorency.

Alice had been introduced to Lord Frankfort by a rather disreputable "actress." For two months, he kept Alice in his Paddington flat; in the term of the day, she was "under his protection." She was not allowed out, she saw no visitors. In September, she bolted. Lord Frankfort's minions traced her to Soho where she was arrested for having pilfered and promptly pawned two gold snuff boxes, a gold toothpick case and "various other articles of very considerable value."

The ribald Press had a field day. 36-years old, separated from his wife, his reputation for lechery well-established, Lord Frankfort is easily lampooned. The prosecutor, however, attempts to point out that m'Lord's morals are not at issue. On the witness stand, Lord Frankfort admits he kept and slept with Alice.  He boasts that he spent some £300 on her, but he denies he gave her the items in question. At one point, Alice collapses in a fit of hysteria when the prosecutor refers to her as "a gay woman," a slip for which he is sharply cautioned from the bench. The case for the defense is brief. Might a person of his Lordship's temperament, after a good dinner and a bottle of wine, whilst fondling with the prisoner, make her a present of the jewelry, and afterwards forget it? In fifteen minutes, Alice is acquitted to wild applause.

The respectable papers found the entire matter distasteful. The Spectator frowned at "the indiscriminate sympathy of the London mob." The Morning Post added its disapproval: “It really seems to be forgotten that the vices of Lord Frankfort, however disgusting or outrageous, cannot have had any such miraculous power as that of converting the vices of the defendant into virtues ... When we read of decent-looking people struggling to shake hands with the acquitted woman of the town, and exclaiming 'God bless you, my girl!' we recognize, with much pain, an exhibition of French and a repudiation of English sentiment and manners.”

A decade later, the incorrigible Viscount went to jail for his efforts to employ "a system for the debauchery of women in their own homes."

The Old Bailey Online.
Posted by Tom Hughes at 5:32 AM