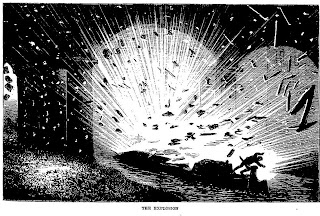 A tremendous blast shatters the pre-dawn stillness across North London. According to The Spectator, "All London was at the window in its nightdress on Friday morning." The explosion occurred just after 5.00 a.m. in the Regent's Canal aboard the Tilbury, a barge hauling nuts, coffee and "the perilous combination of two or three barrels of petroleum and about five tons of gunpowder." The explosion could be heard 25 miles away and dead fish rained from the sky in the West End.

The three hapless bargees aboard the Tilbury died of fearful wounds but incredibly there were no other deaths or serious injuries. It could have been so much worse had the accident happened a few miles to the East where the barge glided through the sleeping slums of Camden Town and Islington. Instead, it takes place near the North Gate to Regent's Park beneath the Macclesfield bridge. The bridge contained most of the blast, however the rush of the air knocked out windows as far away as St. John's Wood.

The homes along the Park's northern terraces are heavily damaged. The streets are soon filled with the dazed occupants and the curious drawn to the scene; one distraught homeowner complained to The Times that the crowd appeared quite too merry for the occasion. As people wander through the rubble and confusion, imagine the plight of the creatures at the nearby Zoological Gardens. According to one report, the explosion "caused great commotion amongst the animals ... and their howling added considerably to the excitement." Thank the Lord that the glass cages housing the zoo's collection of poisonous vipers were not damaged for Friday is their-feeding day and the idea of more than a hundred hungry snakes loose in the capitol city proved troubling for many, even as an afterthought.

The inevitable inquest which followed concluded that the blast was caused by the bargees striking a match to light a morning pipe or cook their tea, the flame igniting the "vapors of the benzoline." The canal managers were condemned for gross negligence in permitting the "highly imprudent and improper" practice of carrying petroleum and gunpowder aboard the same barge.

The Times had the last word, "This explosion has revealed the fact that London has for years been traversed in some of its most populous and wealthy quarters by fleets of torpedoes."
Posted by Tom Hughes at 4:55 AM