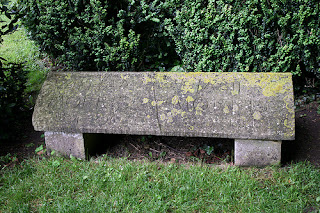 On a truly awful day - windy, cold and raining throughout - the poet, artist, designer and Socialist William Morris is laid to rest in the Oxfordshire village of Kelmscott. Three days before, he had died in London at the age of 62. His last understandable words were "I want to get mumbo-jumbo out of the world."

Toward that end, Morris' well-planned funeral is exceedingly simple; The Spectator called the rites "quaint and unusual." The body - laid in an unpolished oaken coffin - and the mourners travel by rail from Paddington to Oxford, changing there for a special train to Lechlade. Carried by "four countrymen in moleskins," the casket is placed aboard a bright yellow harvest cart, with red wheels, and decorated with green boughs, for the four mile journey to the churchyard. One mourner - Cunningham Grahame, a colleague of Morris' later days - described the funeral for The Saturday Review; the church had been decorated for the harvest festival, festooned with pumpkins, carrots and corn, "such as he himself perhaps had planned, not knowing he himself would be the chiefest first fruit." In the muddy churchyard, despite Morris' wishes for no official Church of England burial service, the vicar of nearby Little Faringdon, a mate from Morris' old public school days, says a few brief prayers.

Among the many wreaths is one from the Socialist Democratic Federation, "In memory of a Beloved Comrade." A leading S.D.F. paper, The Clarion wrote simply, "What Socialist will care for any other news this week...He was our best man, and he is dead." One of Morris' doctors later asserted, "I have no hesitation in saying he died a victim to his enthusiasm for spreading the principles of Socialism." The Times, in its obituary, dismissed the "unpractical extremes" of Morris' politics choosing to concentrate on the man's other contributions; "Most of us find something in the nature of a monument to Mr. Morris in the better taste of our domestic surroundings."

At the grave, Morris' widow Jane appears "very broken down," his oldest daughter, Jenny, sobs quietly. Joining them are townspeople, some members of the Art Workers Guild, and in their workclothes, the employees from Merton Abbey, Morris' print works near London. W.R. Lethaby, a young disciple, wrote, "It was the only funeral I have ever seen that did not make me ashamed to have to be buried."

Photo at poetsgraves.co.uk
Posted by Tom Hughes at 5:08 AM