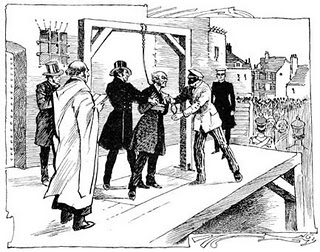 Protesting his innocence and cursing his accusers, 84 year old Alan Mair is hanged in front of the Stirling court house for the hammer-beating murder of his 85 year old wife.

Neighbors told of the old couple's constant arguments and how the old man frequently withheld food from his wife.  Still, everyone was shocked when one night he took a hammer to the woman. In his youth, Mair had worked for the Earl of Selkirk, moving to America where he made a small fortune in the wool trade. Returning to Scotland, most of his money was soon squandered in petty legal squabbles, leaving Mair a poor man and decidedly misanthropic.

Although Mair had received the required death sentence from Lord Montrose, few Scots expected him ever to hang. Sir James Graham, the Secretary of State for Scotland, however, refused to intervene, declaring "the law must take its course."

After a sleepless night, Mair is found in his cell with "tears streaming through his bony fingers" which covered his eyes. He begged the jail Governor, "Oh, dinna hurt me ... An'oh! when I gang to the gibbet, dinna keep me long - just fling me off at once." Carried to the waiting noose, Mair uses his chance for some final words to harangue the raucous crowd: "I pray that God may send his curse upon all connected with my trial - I curse all the witnesses with all the curses of the 109th Psalm." His muttered imprecations continue even after the black hood is placed upon his head. For several seconds after the bolt is thrown, Mair struggles horribly with a free hand tearing at the strangling rope.

The decision to hang such an old and probably deranged man horrified many. The Spectator offered mock thanks to Sir James Graham for sending a message of deterrence to Britain's octogenarians.  The weekly condemned the hanging as "an act of barbarism... which will stand as an instance of national debasement."
Posted by Tom Hughes at 5:00 AM