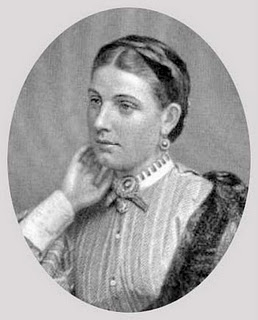 At Wren's masterpiece, St. James', Piccadilly, in a ceremony performed by a minor curate before only the required two witnesses, the celebrated Nile explorer Samuel Baker weds "Florence Finnian, of this parish, spinster."

In fact, the new Lady Baker is a 25-year old Hungarian woman that Baker had purchased at a Turkish slave market in 1860. The exact price was a secret that died with him. Baker made the “purchase” while on his way out to Africa.  A wealthy sportsman, widowed with four daughters, Baker had left England, telling his family, "I am going to Khartoum and thence, God only knows where."  Baker was dismissed by his rivals as a dilettante, nonetheless, he managed to discover (and name) Lake Albert (for the late Prince) and the spectacular Murchison Falls (for the president of the Royal Geographical Society).

Newly returned in triumph to London, Sam and Florence planned this secret wedding to legitimise their relationship. In his best-selling memoir, Baker had already praised "the devoted companion of my pilgrimage to whom I owed success and life - my wife." Despite shared hardships from malaria to pestilential conditions to tribal attacks, he wrote proudly, "She was not a screamer." At one point, a tribal leader had demanded "the little white woman" as hostage to permit Baker to go further into his domain. Baker quickly produced a previously hidden revolver which convinced the chief he would be wise to accept a compass instead.

Their mysterious marital status aside, the Bakers were the great "lions" of the season in London society. Sam is acclaimed by the RGS and knighted by the Crown. However, word was passed to him that Lady Baker would not be welcomed at court; certain details had reached the Queen's attention and she disapproved of the dubious relationship. The great Livingstone had dismissed Florence as "the mistress" and a British consular official reported from Africa that he knew of no "Mrs. Baker."

Sam was not pleased and wrote a friend: “Should I find that the world follows the example of the Queen, I shall give up my country and go elsewhere. For years I have been happy without the world, when we have been together with a poor hut or a shady tree for home, and thus with her I can be happy again and lay down the world at will.”

In 1869, Baker et ux returned to Africa where they were active in the (at times, brutal) suppression of the slave trade. They returned in 1873 to live out their days together in Devon.
Posted by Tom Hughes at 4:37 PM