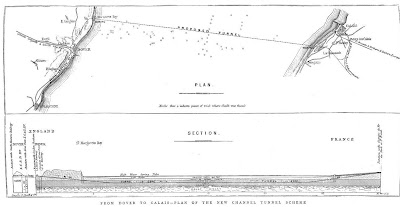 A War Department "Blue Book" is published which effectively scuttles any plans to bore a tunnel beneath the roiling waters of the English Channel (nicknamed "Lake Vomitorium"). Queen Victoria had endorsed one early "Chunnel" proposal on behalf of "all the ladies of England." However, when Prince Albert mooted the idea to Palmerston, the PM responded, "You would think very differently, Sir, if you had been born on this island."

It wasn't until 1880 that Sir Edward Watkin MP, a railway baron in Kent, lined up investors on both sides of La Manche. Their test boring had advanced some two kilometers off Dover. But all worked stopped when questions were raised in Parliament on the wisdom of giving up the security England had enjoyed for centuries beyond "the great ditch."

A Special Commission was asked to report on whether and how the tunnel could be rendered useless to an invader. The Blue Book plan would cost millions: it calls for a fortress, manned by 10,000 men, at the English entrance, a huge portcullis to seal the tunnel, sluice gates to flood it and "irrespirable gases" to be pumped into the air ducts. Even with all that, the Duke of Cambridge, the Commander-in-Chief, protests "most emphatically" against any tunnel. The Duke adds that there is more to fear than some neo-Napoleon in France; don't forget that only defenseless Belgium stands between the rising Prussian army and the tunnel entrance at Calais.

Not only the military took to the ramparts, The Nineteenth Century Review carried a petition signed by Tennyson, Browning, Cardinal Newman and the Archbishop of Canterbury, among others from all fields. The London mob added its disapproval, expressed by stoning the windows of the offices of the tunnel builders. The Blue Book puts the cork in the bottle for tunnel fever; The Times believes it will "close the whole question ... for a long time to come," while The Spectator says it should "dispose of the scheme until the Millennium," a prediction off by only a decade.
Posted by Tom Hughes at 7:26 AM