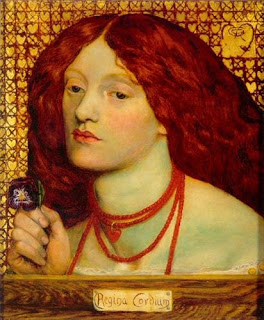 By torchlight, a small group of men unearths the coffin of Lizzie Siddal Rossetti in Highgate Cemetery. From it, they then remove a volume of poems that the grieving author had interred with his wife in 1862.

Absent from these bizarre proceedings is the poet himself; Dante Gabriel Rossetti, having authorized the exhumation and paid the two guinea fee, had fled to Scotland. He wrote Swinburne, "I have undergone so much mental disturbance on this matter."

Rossetti's guilt over his young wife's death never left him. At 17, Lizzie had become his model. Their long relationship ended in an unhappy marriage. Rossetti shared his affections with Jane, wife of his friend William Morris, and carried on openly with Fanny Cornforth, whom he had met at the infamous Argyll Rooms. Lizzie's unhappiness deepened when the couple's first child was stillborn. In February, 1862, Rossetti came home to find his wife in a laudanum-induced stupor. Oscar Wilde told the story that Rossetti, in disgust, handed her the bottle, sneering, "There, take the lot of it" and stormed out of the flat. Lizzie was found dead in the morning.

A coroner's jury ruled her death to be accidental but Rossetti knew better. At the burial, Rossetti placed the poems, bound in gray calf leather, in the coffin by Lizzie's head. Rossetti wrote: "I have often been working at these poems when she was ill and suffering and I might have been attending to her and now they shall go."

But, by 1869, Rossetti had decided that poetry, not painting, was his milieu. At first, he tried to recreate the buried poems from memory but confessed he'd been "going mad" from the effort. The retrieved volume, entwined in Lizzie's famous long red hair, was stained and discolored. Soaked in disinfectant and dried page by page, the poems were saved and published in 1870.

Ironically, Rossetti's volume was so savagely attacked (in a famous article entitled "The Fleshly School of Poetry"), he too tried suicide with laudanum, but failed.