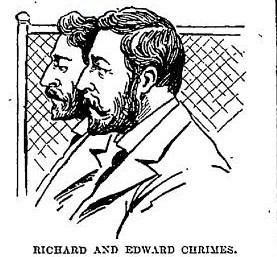 Scotland Yard cracks, what Crown prosecutors will call, a plot of "as consummate infamy as had ever been concocted in the annals of crime."

From an office in the very shadow of the Old Bailey, the aptly-named Chrimes brothers sold via mail-order "Lady Montrose's Miraculous Female Tabules." Advertized in less-scrupulous publications, the pills are guaranteed to end a pregnancy. In two years, some 10,000 women bought the worthless pills but the ladies could hardly complain to the authorities since such abortifacients are illegal.

Greed proved the three brothers' undoing when they added blackmail to fraud. Hundreds of their clients received a letter - inside three envelopes to insure privacy - signed "Chas. J. Mitchell, Public Official," addressed to "Madame".  It read:


"I am in possession of letters of yours by which I can positively prove that you did on or about --- commit, or attempt to commit, the fearful crime of abortion by preventing or attempting to prevent yourself giving birth to a child. Either of these constitute a criminal act punishable by penal servitude, and legal proceedings have already been commenced against you and your immediate arrest will be effected unless you send me, on or before Tuesday morning next, the sum of 2 pounds, 2 shillings."

The letter writer also required, in writing, a "solemn promise on oath as before God that never again, by whatever means, will you prevent, or attempt to prevent yourself giving birth to a child." A mail-drop was set up near Trafalgar Square and a hapless clerk hired to pick up the mail and bring it down to Brighton. The whole scam collapsed when one such letter arrived for a warehouseman's wife in the City and her husband opened it and went directly to police. The unknowing clerk is arrested as he arrives on the 10th to pick up the day's mail (with over £240 enclosed).

Watching from a safe distance away, the Chrimes brothers bolt but can't elude "the Yard." Richard and Edward were found in Penge while Leonard got as far as Cornwall. The two elder Chrimes brothers got 12 years each. Leonard, the youngest and least involved, got 7 years.

The mail, meantime, kept piling up; in one three day period, the scam netted £800. Wrote one woman, pathetically, "I will promise that I will never do wrong any more, for Christ's sake. Amen."
Posted by Tom Hughes at 5:24 AM