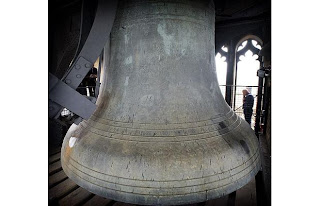 After a startling series of misadventures, the great bell is finally raised in the clock tower at Westminster. Using 1800 feet of chain and working at a giant windlass for thirty hours, workmen hoist the 13-ton bell to the clock room, 190 feet above the Thames. The bell is nicknamed "Big Ben," for either the Clerk of the Works, Sir Benjamin Hall, or - perhaps, more likely -the popular prize-fighter, "Big Ben" Gaunt.

The new Houses of Parliament (rebuilt after the fire of 1834) had re-opened in 1852, without a clock. Amateur horologist Edmund Denison had his machinery ready by 1855, awaiting only the great bell. Cast in Teeside, the bell was singularly ill-fated. It was dropped while being loaded aboard a ship for London. When the bell arrived at Westminster, officials soon figured out it was too wide for the shaft. As charges flew back and forth, even worse news came in: the bell had cracked during practice ringing and had to be broken up and entirely recast. While three tons of bulk were lost, the bell still won't fit in the shaft and must be raised on its side, then righted in the clock room to be then hoisted the final 40-feet to the bell tower. The Illustrated London News comments with relief, "It was an arduous and anxious affair for all engaged."

However, the problems don't end yet: the bell proved too heavy for the framework, too loud for MP's who complained of deafness, and, incredibly, a year later, it cracked again. Denison, now under fire from all sides, returned as good as he got. In fact, The Times announced they would print no more of his letters, "pouring out peals of jarring abuse."

The bell obviously had to be repaired in place and it was. A quarter-turn seemed to do the trick. With few interruptions, the bell has since tolled the hour and heralded news of great events. The bell actually intones a portion of Handel's Messiah, with an accompanying prayer, reading:


Lord, through this hour,
Be thou my guide,
That by thy power,
No foot shall slide.